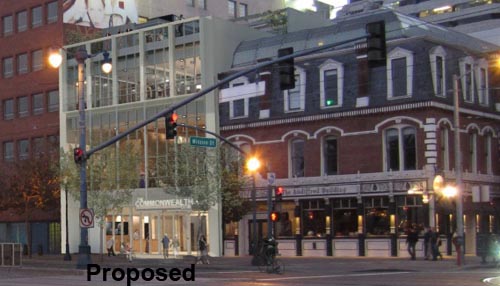 We welcome the club but have several concerns about the plans for their new home (right). The Board of Supervisors expressed many of these same concerns when they voted against another project proposed for the same location. They have found the entire building to be "an historical resource" in a block "that retains integrity." (The Board's findings are detailed below.) We simply want to improve, not stop, the club’s project.

We are particularly concerned about the proposed destruction of four large trees on Steuart Street (below), removal of the building’s classic façade at a prominent location on the Embarcadero, and installation of a modern glass façade (right) that would clearly be out of place with other buildings in the area.

These actions would violate sound planning practices. They would also obviously clash with San Francisco’s objectives to:

• increase and appreciate trees,
• design buildings – particularly in SoMa and at prominent locations – that fit in with the existing neighborhood, and
• protect and enhance historic structures.

We also believe the city should not be encouraging floor to ceiling glass walls that waste energy.

The Commonwealth Club wants to honor the labor history of the building by restoring the west façade on Steuart Street. Meanwhile they would be removing the matching east façade and replacing it with an ugly glass curtain wall at a very prominent location on the Embarcadero. It would look like a Gap Store. The building is not historic on only one side. The Planning Department is clearly incorrect when it states the project would not cause a substantial adverse change in a historical resource. 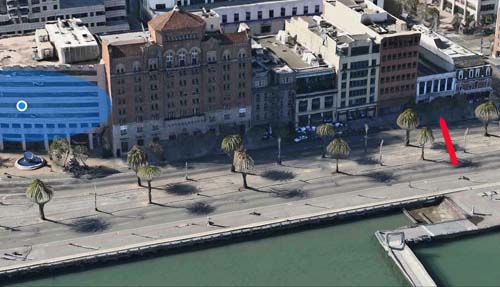 This historic Classical Revival building has handsome columns flanking five large windows. It is the same design on both sides of the building. Though poorly painted at this time, a dignified design needs to be maintained to stay in sync with the rest of the block. The Planning Department is incorrect when it states, “The proposed project would not have a significant impact upon the existing character of the Project’s vicinity.” 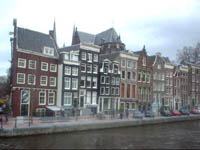 This is a wonderful and rare block of mostly post-earthquake buildings (left) that should become a historic district along with Rincon Annex. It is even more important because it faces the open waterfront. One building on the block survived the earthquake and fire and still exists at the north end (the Audiffred Building). Many of the others are nearly 100 years old and need to be maintained, such as the YMCA. (The block can be compared to the buildings of Amsterdam that face the canals (right). That city requires them to be either preserved or designed to maintain the historic look.) The rest of the buildings were designed with a dignified, classic look including the streamline moderne office building at the south end of the block. None have the uninteresting glass curtain wall appearance that the club is proposing. 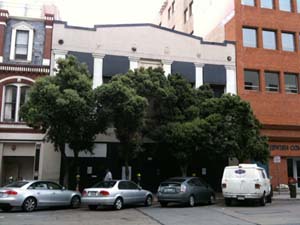 • Destruction of trees: Contrary to what the Planning Department states, the project would substantially damage a scenic resource which includes trees. Current plans call for the removal of four, two-story high trees in the sidewalk on the Steuart side. They would plant four new trees that they call replacements. Nothing represents the green movement more than trees, but unfortunately the club and city seem to be considering them as an inconvenient nuisance to be easily discarded. They should instead be celebrating the fact they are moving to a location with large, healthy, carbon dioxide-eating shade trees, instead of waiting years for new ones to mature. Any talented architect and qualified contractor know how to incorporate existing trees into a project. It is a fundamental rule of good architecture that projects be designed to fit the site – not the opposite. There are only three other trees on this side of this long SoMa block. Of course city planners are cut and pasting the usual abused boilerplate claim, without evidence, that the trees are diseased and at the end of their life cycle.

• Glass walls: The city needs to discourage floor to ceiling glass walls. They waste energy year round and are not necessary to enjoy views. While they may add some curb appeal to a building, people actually do not like them. They are cold in winter and hot in summer, even in SF.

BOARD OF SUPERVISORS FINDINGS:

It should be noted that the San Francisco Board of Supervisors found on March 31, 2009 that some of the same issues were significant. Their motion stated the following about the current building:

• “There is substantial evidence that the existing building at 110 The Embarcadero, which also fronts 113-115 Steuart Street, is an historical resource.”
• “…there is substantial evidence in the record that the building retains integrity…”
• “…the building remains in its original location, the historic Audiffred Building remains next door and five of the buildings in the vicinity visible from a 1934 photograph still stand, resulting in a blockface that retains integrity. The massing and scale of the building, the shaped parapet with coping and the stucco cladding of the building remain the same as they were in 1934. Bradley Wiedmaier (who supports the Commonwealth appeal) states that the second floor window opening dimension, the number of openings, the depth of the glazing from the wall surface and framing remain the same.”
• “…alterations (already made) to the façade details mentioned by Page and Turnbull are largely reversible.”
• “Given the substantial evidence in the record to support a determination that the building is an historical resource because it retains integrity associated with important historic events, there is a fair argument that the project, which proposed the demolition of the resource, may result in a substantial adverse change in the significance of an historical resource requiring the preparation of an EIR.”
• “Planning Department staff found the project inconsistent with Planning Code Section 101.1(b)(2), which calls for conserving and protecting … neighborhood character.”
• “Written and oral testimony presented at the hearing identified the potentially significant impact on birds flying into the “mostly glass” walls….”

The Planning Department should not be ignoring the Board of Supervisors. There is no reason demolition of the east façade of the building which faces the heavily traveled (pedestrian, bike, auto, streetcar) Embarcadero should be allowed now.