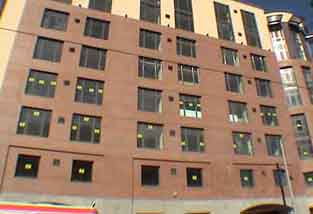 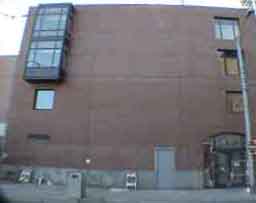 Called "the city's most disappointing new building" by the 'Chronicle' (4/21/05), this new hotel built in the south end of Ferry Building Plaza (on land zoned for open space and public use) is the first of many new buildings planned for the waterfront (including restaurants, retail complexes on piers, and at least one other hotel). Things do not look good. Not only is it ugly architecture, it blocks views of the Bay from the plaza at Mission and Steuart streets worse than the Embarcadero Freeway did! Apparently there is a lot more of this to come.

This hotel replaced the Transit Terminal that had been at the Ferry Building for 125 years (above right). Muni will never get the terminal back, and we hardly need one more boutique hotel. The terminal was directly across from the growing number of ferry slips. For ferry service to be successful, it has to easily connect with city transit. The terminal met that need perfectly. The terminal also provided an off-street location for 11 city bus lines to park buses hundreds of times a day while awaiting the start of each run. This allowed for some light maintenance of vehicles, supervisors to monitor schedules, and drivers to take a break. Without this terminal, all of these operations are being spread out along the streets and sidewalks around the neighborhood causing congestion problems (left).

This view (right) shows how the terminal could have been improved if Muni started to maintain it (as originally planned). Muni had already awarded a $200,000 contract to improve the terminal (now gone). In addition, they have spent hundreds of thousands of dollars to move the streetcar wires for construction of the hotel.

What is most alarming is that there is a lot of dull and bad architecture to follow. The Rincon Hill high-rises are totally bland (although a Miami-based architect has now been hired to re-design one of the buildings). The oversized restaurant complex proposed for Rincon Park would block views for almost an entire block and conflict with the Bay Plan. That appears to violate state law, but the Bay Conservation and Development Commission (BCDC) is pushing the project along nonetheless. They will vote on it in a few months.

The entire justification for the hotel project is that the city will get some additional revenue from the hotel. The promoters talk about income in "yearly averages" without mentioning that it is spread out over 65 years. An analysis by San Francisco Tomorrow’s transportation expert exposed a convoluted sliding scale showing most revenue would not be seen until after the year 2050! That is about the same time the hotel operator can opt out of the whole deal. The analysis indicates inflation and other costs (such as moving the bus lines) would largely offset these distant benefits. SFT's report also says Muni's projections assumed a strong economy for 65 years! Not surprisingly, those pushing the hotel have been resistant to releasing this public financial information.

Planning officials and our elected leaders know San Franciscans care about what is built on their waterfront, and projects like this hotel clearly violate that public trust. If Martha Stewart can be led away to prison in handcuffs, perhaps it is time to do the same with some city planners. 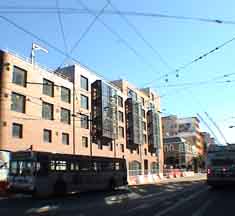 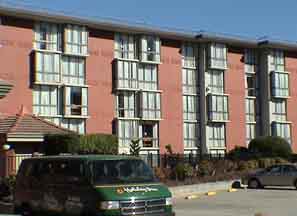 Image #3: West side of hotel facing Steuart Street. The ugly overhead wires are new because of the relocated bus lines.

Image #4: For comparison: the old Holiday Inn at Fisherman's Wharf. (We can't do any better than that?)