The Owners of Rincon Center

Rincon Center has been divided between two independent owners since 2007. Despite an invisible division, old-timers will always recognize the block as one place: RINCON CENTER. Various other names that owners cook up from time to time (like "Altavie Suites" and "Carmel Rincon") come and go, just like the owners. The place will always be RINCON CENTER.

Observing the various owners and operators of Rincon Center over the years has sometimes been like watching one of the cheesier episodes of TMZ. Quasi-celebrities involved here have included a sitting President's close friend and former roommate, the spouse of a prominent CNN star whose divorce dominated the tabloids, the husband of one of California's current US senators, and even the grandson of IBM founder Thomas Watson. They all know Rincon Center well.

BTW, we use the term "owner" loosely here. Most of these companies are probably part of a very complex series of leases, subleases, and leasehold ownerships. We believe the US Postal Service is still the landowner here. In the mid-1980s the leasehold owner intended to sell a portion to a subsidiary of the Chrysler Corp. So the next time an office manager tells you they can do something because they own the place, you might ask them if they don't lease here -- just like you do.

Here is a history of Rincon Center's "ownership":

The developers and original "owners" of Rincon Center were Perini Corp. (Massachusetts) and Tutor-Saliba Corp. (Los Angeles). The City of San Francisco sued both companies for fraud. Read the 'Chronicle' article about the suit dated 11-6-02. Another article appeared in the 'Chronicle' on 5-4-03 about the questionable relationship between Perini, Tutor-Saliba, and a Glenborough board member. The 'San Francisco Independent' covered the same story.

Rincon Center was acquired by the Blackstone Group (90%) and Glenborough Realty Trust (10%). Glenborough managed the complex. They were not friendly to low-income tenants.

In 2001 these corporate landlords slashed by half the number of apartments at Rincon in a successful city program, created by Mayor Feinstein, that provided affordable housing for certified low- and moderate-income renters. The tenants could remain but would have been hit with prohibitive rent increases. The city could have negotiated a continuation of the program, which it has done at other buildings, but failed to do so here. The Rincon Center Tenants Association insisted on being present at negotiations between the city and Glenborough. The Tenants Association successfully demanded that the current tenants remain in the program until they chose to move out. The apartments are no longer affordable.

In 2005, landlord Glenborough Realty Trust sent illegitimate eviction notices (left) to the poorest (Sec. 8) tenants at Rincon for no valid reason. Was this illegal? To its credit, the SF Redevelopment Agency stepped in and told Glenborough to rescind the eviction notices. Click on the image of the notice to see a larger version.

They also raised the rents of low-income tenants at a higher rate than wealthy market-rate tenants -- 25% between 2001 and 2004. 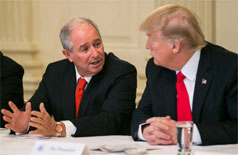 The Blackstone CEO, Stephen Schwarzman, was paid approximately $400 million (over $1 million a day) in 2006, the year Blackstone sold Rincon Center. While raising low-income tenants' rents excessively, he set the record by paying the most ever spent for a single New York apartment. According to the 'New York Observer' he paid over $35 million for--not the building--just his apartment at 740 Park Avenue. It has a 60-foot-long entrance gallery (left), a library with paneling older than the United States, and a dining room that seats 48. He hosted a Republican fundraiser at the apartment in April 2007 that his friend, and college roommate, then President George W. Bush attended. He is now a big Trump supporter.

Schwarzman co-founded the Blackstone Group with its chief operating officer, Pete Peterson, who was part of Richard Nixon's cabinet. He was paid $212 million in 2006. They only hang out with the best (?) presidents.

Glenborough has commercial properties all over the country. This was the Glenborough board at the time: Senator Dianne Feinstein's husband, Richard C. Blum. Patrick Foley of DHL. Laura Wallace, the Chief Investment Officer of the Public Employees Retirement System of Nevada. Robert Batinovich, the Chairman of the Board of Glenborough Realty. Andrew Batinovich, President and Chief Executive Officer of Glenborough Realty. Richard A. Magnuson, an Executive Managing Director at CB Richard Ellis Investors.

Beacon Capital Partners (Boston) bought all of Rincon Center for $275 million in June 2006.

Capital Properties (New York) bought the residential portion of Rincon Center on June 8, 2007 for $143 million. The center then had two owners based on the east coast. Both had the word "capital" in their names. Capital Properties was run by the spouse of CBS/Fox/CNN star Paula Zahn (right). Cap Prop began remodeling 84 apartments into short-term corporate suites under the name Altavie Suites. These units, with limited kitchens (no ovens), still exist in this configuration. To remodel and run the place, Cap Prop brought in the grandson of IBM-founder Thomas Watson. His other grandfather was the developer of enormous Bishop Ranch in Pleasanton. These grand plans ended in 2010.


The lender foreclosed on Capital Properties in October 2010, and Carmel Partners (www.CarmelPartners.com) picked up the residences for $73 million -- about half what Cap Prop paid. The new owners walked into Rincon and found the Cap Prop employees had been instructed to put down their pens, grab their coats, and exit the building. Incomplete tenant paperwork was laying on desks. This all led to a legal battle that went on for years (Rincon Ev Realty LLC et al. v. CP III Rincon Towers Inc et al., 496887). 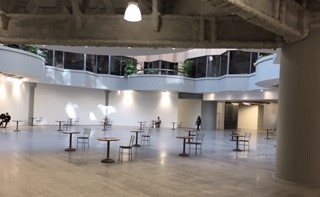 The commercial portion of Rincon Center, which had been very prosperous, was sold to Hudson Properties during this period. They gutted the cathedral-like interior of the historic post office, removing its marble flooring, Richard Haas murals and beautiful one-of-a-kind five-story rain column. It is now a hideous empty shell. They also tried to remove a portion of the historic lobby and turn it into a cocktail lounge.