Topics covered on this page are:

Rincon management is often resistant to implementing even simple improvements suggested by tenants/customers, even when they require almost no cost or time. Some specifics:

- Hudson often schedules construction and water shut-offs for times convenient for their commercial tenants. Graystar meets with Hudson to discuss these things, but there is no indication Graystar goes to bat for the residential tenants.
- Graystar removed carpeting from apartments and, unfortunately, installed thin replacement flooring. They do not require even basic sound-reducing practices. One tenant said he can hear his upstairs neighbor's dog walking around.
- For years tenants asked various managers to post simple paper signs in the laundries reminding tenants to not leave their clothes in the machines for hours. Cost to do this? About 75 cents. They finally did it after several years, but the signs are so innocuous that people do not notice them.
- When tenants unlock the front door from the sidewalk, they only have a few seconds before the door locks again. This is not enough time for people with packages, disabilities, etc. Management has not been willing to extend the time even a few seconds.
- Management restricts food deliveries upstairs. They were asked to make an exception for seniors and disabled tenants receiving essential groceries (not restaurant deliveries). There is no indication management is willing to do this.
- Hudson blasts extremely loud announcements into apartments that are often pointless and actually sometimes dangerous. They love to rudely tell us we can ignore alarms that are being tested, even when we do not hear those tests. What is the point of that? It is actually dangerous to tell anyone to ignore alarms, ever, and that should only be done when absolutely necessary. Apparently our management team has never asked Hudson to stop doing this.

These are all reasonable requests. Corporate employees are often encouraged to do things that please their customers, especially when those things do not cost much. Apparently Graystar is not familiar with the concept. (October 2020)

The last cement-pour was for the roof on July 22nd. The next significant event will be completion of the exterior curtain wall. The contractor says things should then be quieter because work will be contained inside. We hope so. (July 2020)

This is an example of a business taking local residents for granted. High prices and mixed service kept many Rincon residents from shopping there anyway. It is suggested that Rincon residents scan the food available at Walgreens. If you haven't done so recently, you may find more is available there than you realized. It's also cheaper. There is a review of some area markets at the "Food Markets" link to the left. Many have delivery and parking. Some are at a walkable distance and you can take a taxi back.

Local restaurants may also be wishing they had developed better relations with locals now that office workers, tourists and ballgames are absent. (July 2020)

The Tenants Association has addressed noise issues for many years to try to keep this neighborhood habitable. We have had numerous meetings with city officials and try to head off problems before they begin. There have been very serious problems with city night work which have included pile-driving all night long. We have opposed nightclubs coming into the neighborhood after a bad experience with one on Steuart Street in the 1990s. We have asked neighboring buildings to restrict construction activities to between 7 AM and 8 PM. Tenants should call dispatch at 553-0123 to report problems outside those hours.

Tenants are reminded that some noises travel easily between apartments, especially since Carmel removed carpets. Men's and women's boots and the moving of furniture are very loud to neighbors beneath and next door. The closing of windows, doors and cabinets should be done gently as these noises also transfer easily. If you don't hear these noises, it is probably because you have considerate neighbors. Please return the favor. (April 2016)

BMR tenants are being asked to re-certify without a clear understanding what the rules are. Management and Mayor Ed Lee's Office of Housing are pointing to different sets of rules. We have asked Supervisor Jane Kim's office to help us sort this out (along with several other fundamental problems). There are several glitches in the process, and it is important that BMR tenants let the Tenants Association know if you are encountering problems re-certifying. One example: Mayor Ed Lee's Office of Housing lowered the salary ranges which could cause some tenants to be moved into a higher rent category (with a rent increase as high as 25%) EVEN THOUGH THEIR INCOMES HAVE NOT GONE UP. These things should not happen, and it's important that you contact the RCTA if you encountered any anomalies like this. (March 2014) 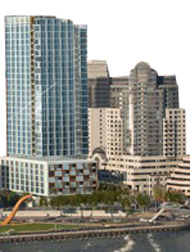 The New York owner of the garage at 75 Howard has submitted their high-rise plans, and it would be massive. 31 floors would tower over Rincon Center. By comparison, the large office building immediately to the west (201 Spear) is 18 stories. 75 Howard would be a whopping 75% over the existing height limit. It would not only block tenants� views at Rincon Center, but many views from 201 Spear and 120 Howard. Those building owners would lose considerable rental income. Expect opposition from many sectors. Click here to learn and see more. (Jan 2013)

Rincon Center has become a very noisy place to live � even by urban noise standards. The city has street work projects on three sides. 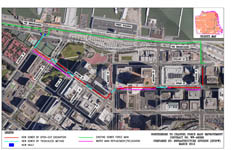 This work has included pile-driving and jack-hammering at night. Inside Rincon, apartments are being jack-hammered to install new ceramic flooring. Wood floors are being installed without the usual requirement for rugs to dampen sound transfer.

The Tenants Association called a meeting on October 4th for residents and city officials. At our request, Supervisor Jane Kim called city engineers and asked that their jack-hammering and pile-driving not be done overnight. That has at least made it possible to sleep at night.

Click on the map to see the new and existing sewer lines that the city is working on. (Nov 2012)

Because it was built after 1979, Rincon Towers has no rent control protections provided by the SF Rent Board. Landlords can raise rents as much as they wish on market-rate tenants. However, they are required by state law (Cal Civil Code 827) to give 30-days notice. They must provide 60-days notice if the increase will be over 10 percent.

Tenants researching rent adjustments need to have a clear understanding about what regulations they are learning about. Most apartments in SF are rent-controlled, so many web sites and news articles are written as if the Rent Board�s rules apply to everyone. They do not apply at Rincon Center.

Some tenants at Rincon participate in a city Below Market Rate (BMR) Program that is independent of the Rent Board. BMR rent adjustments follow a formula provided by the city, and the Tenants Association monitors this process closely. Unfortunately the city is locked into a nonsensical formula that does not relate to the economy, the market, or any other logical benchmark. BMR tenants can get large rent increases at times too, even when market-rate rents are flat. However, BMR rents must remain lower than market rents. Market tenants can inquire at the leasing office to see if they qualify. The BMR Program has three tiers of incomes and rents. 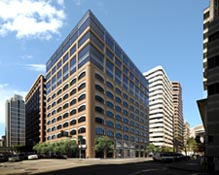 The owners of this building directly across Spear Street (home of Copymat) received final approval on October 20th to add four additional floors. They said they planned to begin construction soon. We met with the owners, Shorenstein, and have a letter written by their contractor pledging that �the vast majority of the work shall occur from 7 a.m. to 4 p.m. Monday through Friday.� (The city allows such work between 7 AM and 8 PM, but the owners don�t want to pay the higher wages of a swing shift.) We will also have contact numbers in case of problems.

They said the work will take about 18 months, but most of this will be interior work which Rincon tenants hopefully won�t hear. They said construction of the steel frame and exterior siding goes �relatively quickly.� Before that they will remove the existing penthouse. We emphasized to them that, among other things, we don�t want workers showing up and making noise before 7 AM. The project was challenged by a neighboring building owner over seismic concerns. Click on the picture to see a larger version. (Jan 2010)

The lender foreclosed on Capital Properties of New York. The new owner of Rincon Center Apartments is Carmel Partners, Inc. Tenants' leases remain valid. Any owner must abide by the original owner�s contract with the city which maintains the building�s current use until 2021 at least. That includes the BMR Program. Staff consistency is important, and we hope they keep the good staff members who know how things work. One good change already: rent checks can be dropped off at the leasing office. (Oct 2010)

Has it been over a year since you received any interest from your security deposit? Chapter 49 of the SF Administrative Code says landlords "...shall pay simple interest on all security deposits held for at least one year for his/her tenants..." Under "Remedies" it points to Section 1950.5 of the California Civil Code which states "Any action under this section may be maintained in small claims court..." More information, including each year's interest rates, can be found at the SF Tenants Union web site.

A fire broke out in an apartment on 16-east. Apparently it started in one of the newer Fagor-brand stainless-steel refrigerators and was extinguished by the automatic sprinkler. The tenants were away. Engineering responded quickly, warned tenants on the 16th floor, and worked well into the evening cleaning up. The general manager of the commercial side of Rincon was also on hand providing assistance. Water flowed down to the seventh floor, in the units next door, and about halfway down the hall. Most tenants at Rincon have 20-year-old refrigerators, but it was one of the new ones brought in during the 2008 remodeling of corporate units that caught fire. The Tenants Association would like to know about any other incidents with these appliances. (June 2010)

Tenants are still frustrated by those front-load washers that sometimes don�t spin dry clothes. They seem to work okay in the more common wash modes such as whites and permanent press. We suggest using the top-load machines for delicates and cold water washes.

Tenants are reminded that they should not leave clothes in any of the machines after they are done. Some tenants leave laundry in machines for three or four hours. The laundries can get crowded very quickly and this compounds the problem.

At our request, the city recently re-planted the small garden above the tunnel at the Embarcadero. It is still pretty thin, but that is probably just as well considering the lack of maintenance it will get. Last time they planted it, the spot became overgrown in a year or two.

Rincon tenants can sign up for only $25 (that�s $50 off the normal price) and get $25 in driving credit. Just go to www.zipcar.com/rincontowers and use the promotional code SF25. 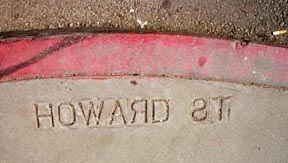 The best way for tenants go get the latest information about Rincon Center is to get on the Tenant Association's e-mail distribution list. Provide us your e-mail address and you will get alerts the quickest. (If you don�t have e-mail, we will try to keep you posted by phone.) E-mail* us your contact information or call Dave Osgood at 777-2185. Give us your name, apartment #, phone and e-mail. (The Tenants Association has a long track record of respecting tenants� privacy. We never share tenants� contact info with anyone else, including management.)

This Web site was created because of the lack of information about important issues at Rincon Center such as security, rent increases, maintenance, and the BMR affordable housing program.

You can also find out:
- who owns Rincon Center. (The Owners)
- what supervisorial district we live in. (Voters' Guide)
- if your dishwasher has been re-called as a fire hazard. (Rincon Living)
- what the Tenants Association is doing about BMR rent increases. (BMR Program and Accomplishments)